← Your cloud is busy raining, try again later
The cloud has been made happy again →

For over six years now I’ve had a MSN Direct watch on my wrist.  I was originally given the Suunto n3 at a MVP event (which subsequently caused much grief trying to activate it) and later on was upgraded to a n3i.

At the time, smart phones and their attached data plans were still in their infancy and were quite expensive.  So MSN Direct, being only ~$80/year and only a once-a-year expense seemed reasonable.  You got different watch faces, weather, news, your calendar, Messenger integration, movie info, and other information all right there on your wrist, without any synchronization or fuss.  As long as you kept it charged and stayed in North America, it just worked.

Or did work until a few hours from now when they pull the plug.

Admittedly those of us who actually used MSN Direct have been surprised that it’s lasted this long.  I suspect it’s only stayed up for contractual reasons with the various vendors involved, as well as not being all that expensive to maintain.  MSN Direct uses “DirectBand”, a Microsoft technology which injects data into the subcarrier of an FM radio station.  So beyond the initial installation and probably a regular payment to the related media conglomerate, it probably didn’t cost anything to be running (web costs, support, notwithstanding).

One annoying factor about the watches is that like old-school PDAs, when they run out of power, all data contents are lost.  This wasn’t a huge deal before as they’d just re-download all their data from the network, but now without the network, a power outage would drop all the downloaded fancy watch faces and any other information stored inside permanently. 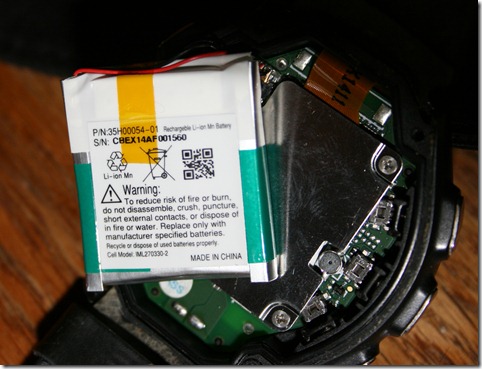 This known, about four months ago I opened up my watch, took big high resolution DSLR pictures of the battery and noted down all the part numbers on a quest for a battery replacement.  The battery had lasted at least five years, so I figured a new one would do the same if treated well.  My web searches on the various part numbers yielded no results.  So hoping they could assist with alternatives, I sent my information and pictures to a variety of battery vendors online (including one I’d dealt with before for batteries for my old Microsoft Cordless Phone).

I got two replies – one was shorter than a Steve Jobs email, “We cannot provide.”  The other was a little more gracious but it was clear all they did was copy/paste my part number into their search box (as if I hadn’t done that myself).  None of the others bothered to reply.

So, I gave up on that as a single forget-to-charge would drop the contents of the watch and eventually I’d be back in the position I’m in now anyway.

I have been watching a variety of alternatives for quite some time now – the MetaWatch, inPulse, i’m watch (vapourware), and many others.  I’m not really sure if I want to buy into any of these.

However, my phone (with some minor exceptions) can handle this task relatively well now so that feature has been become less and less important.  With that set aside, I’ve also been looking at “normal” watches too.  I have to say I haven’t found anything yet that has stood out to me and the only one I’ve really liked was the GIEZ GS1300B-1, brought to my attention by my not-related-but-still-have-the-same-last-name contact Julian Kay.  Unfortunately it’s a little too out of my league right now though.

So, I’m not really sure what I’ll do.  For now, I’ll probably just hunt around in my drawer for some older watches I used to wear and go from there.  Which is probably what most MSN Direct users did quite some time ago.

Posted on January 1, 2012, in Uncategorized. Bookmark the permalink. 11 Comments.

← Your cloud is busy raining, try again later
The cloud has been made happy again →