Yahoo Messenger for Vista killed off

I noticed today on the Yahoo Messenger blog that they had axed Yahoo Messenger for Vista.  For those who weren’t aware of it, initially the client was just a rumour, then screenshots and demos appeared and then finally it was released as a preview about 10 months ago.  Since then, Yahoo has improved every few months by adding more and more functionality that you would expect from any IM client.

And unlike what was published over at Messenger Stuff claiming that Windows Live Messenger 2009 would be built with WPF (Windows Presentation Foundation) or have so-called “WPF Effects” (it has neither), Yahoo Messenger for Vista was written entirely in WPF and managed code (.NET).  In addition to this, it also supported certain Vista only functionality, such as a sidebar gadget to display a favourite contact (poor man’s implementation of Messenger Plus’ desktop contacts) and some unique features like voice visualizations. 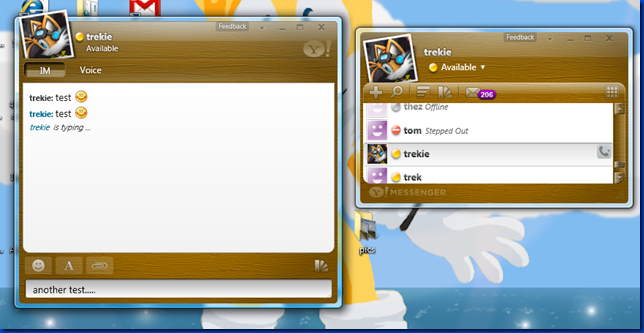 That all said, I’m surprised it’s been killed off given that the basic functionality of most IM clients was complete.  The client was relatively stable and it certainly felt “cutting-edge”.  I suspect either current economic events have killed this project off or some internal management restructuring was it’s final end.  It really is a shame that a such promising project has ended ad will no longer be available.

In an industry like IM where innovation seems to be non-existent, it was quite refreshing to see something new.  It’s unfortunate that now Microsoft and others will have no reason to consider the same route, since there will be no competition in this regard.

The Messenger service is down (and up, and down again)

Beginning last evening (here in Eastern Standard Time), the Messenger service went haywire and has remained so as I write this.  Even if you have been able to sign in, it seems to be going up and down.

UPDATE: The service appears to be operational and stable once again

The status page
If you check the .NET Messenger Service status, it says All systems are stable and running.  This is wrong.  In fact, within the last few outages we’ve had over the course of a few years, this page has remained silent.  Even when it was so-called actively updated, it was usually out of date by telling us about outages after they had occurred and only really showed scheduled maintenance.

But other people are on!
It does appear that some accounts can still sign in, so there are a few people still on Messenger.  If you happen to have another account, you might try signing into that one to see if you can at least sign in, but remember that a good majority of others can’t sign in either (so who are you going to talk to?).

I searched for the error code and…
…it told you to delete this file, or delete this and that in the registry.  Don’t bother.  Just try again later.

Just got a message regarding my MSN Direct Smart Watch from Microsoft, it reads:

The upcoming version of Windows Live Messenger 9.0 (Beta Date 9/17/08/Release to market date 2/10/08) will NOT work on your Smart Watch device. If you would like to continue using this feature on your smart watch, we recommend that you do NOT upgrade to Windows Live Messenger 9.0 and continue to use your existing version. Thank you for your support.

If you experience any difficulties, please visit http://www.msndirect.com/MSNDirectSupport.aspx or call MSN® Direct Customer Service at 1.866.658.7032.

So it seems that the final version of Live Messenger 2009 is due for February 10, 2009 (assuming “Live Messenger 9.0” is meaning Live Messenger 2009, version 14 and 2008 being 2009; which I don’t think is a stretch).  It’s a bit disappointing that this functionality is being removed considering I do pay for it.  Alas, it was never used all that much anyway, especially since the option only showed up when set to the US or Canada locale.