One aspect of software development that I’m quite keen about is user interface design (or user experience depending on who you’re talking to).  The art of designing an interface which is both intuitive to new users, powerful and familiar to experienced users, but yet still maintains a clean look varies from difficult to downright impossible.  Microsoft publishes user experience guidelines for Windows to maintain application consistency and to [try to] keep developers as sane as possible.  I’ve always enjoyed reading through the guidelines, not just for educational purposes but because they frequently use Messenger to show the “incorrect” interface implementations.

Lucky for us, they didn’t fail to disappoint in the Windows 7 version of the guidelines.  Suspiciously the name Jonathan is used in a majority of these screenshots, but I promise it’s not me!  Please note that these images are mainly mock-ups and will never be seen in the actual Messenger application.

Take this example of using Windows 7’s thumbnail toolbars incorrectly.  If this were real, it would certainly be a bit difficult to find and unnecessary.  However, being able to sign into another account in this way would be nice: 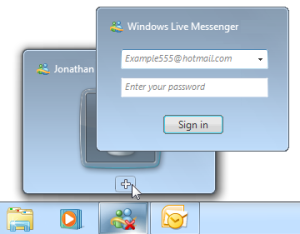 Another incorrect example using the same button to represent some sort of ‘Remember me’ feature:

Thumbnail toolbars are supposed to be instant, one-click affairs and this example shows that being implemented incorrectly with a menu right above: 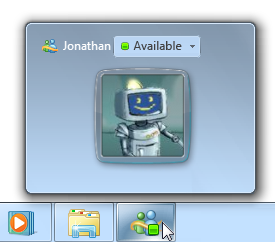 This shows the correct way Messenger uses an overlay icon on the new taskbar to show your current status:

…and this shows the wrong way:

Mind you, if the icon changed to this on my birthday, I wouldn’t complain.

The mail icon here is noted as being for “chat”, but I suspect Joe (I guess it was Jonathan’s day off) would think otherwise:

The options screen gets an appearance as an example of the correct reasoning to use vertical tabs:

Here’s a balloon I’m sure most people have seen before.  This is an example of an incorrect warning notification as it serves little purpose besides to worry and distract the user:

Messenger even makes a star appearance with the correct example of several other dialogs:

According to the guidelines you are not to put your own controls (buttons) in the window frame, but instead leave them in the application window itself.  This is an example of it being done incorrectly:

An old version of the Live Messenger setup is used to show the correct way of allowing users to opt-in.  Sadly none of these options exist in the latest installer:

Finally, the guidelines now state to avoid window titles that have “awkward truncations” as shown in this sample:

So you’ve set up your camera successfully in Messenger.  Next, you click the Video button at the top of the screen, your contact accepts and you see them but all they see is: Or instead of a video call, you want to use the Show my webcam feature but when you try it appears grayed out:

The solution
With thanks to my good friend Sam (otherwise known to some as Underlord), after suffering with this for awhile, you can now workaround this bug by re-enabling the “Allow others to see that I have a webcam” option.  To get to that option, open up any Messenger window, press the Alt key on the keyboard to bring up Messenger’s menu bar, then choose Tools and then Options. 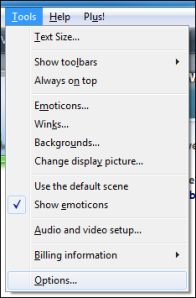 Finally at the bottom of the first options category, verify that the “Allow others to see that I have a webcam” options is selected and click OK.

You should now be able to initiate a video call successfully and select the show webcam option.

My show webcam option is still grayed out
There’s another bug in Messenger where in some cases the show webcam option will still be grayed out, regardless of your allow others to see option as described above.  To work around this problem, you’ll again need to open up any Messenger window, press the Alt key on the keyboard to bring up the menu bar, choose Tools and then choose Audio and video setup.

Click Next on the audio setup screen to get to the webcam selection.  From the dropdown, select Disable.  Then finally choose Finish.

Next, hit the Alt key again to bring up the menu bar, again choose Tools, and then Audio and video setup.  Click Next to get back to the webcam selection, click the dropdown and choose the webcam you just set to disabled.  Finally choose Finish and you should have a working show webcam option again.

In testing, it seems you may need to repeat this process with every Messenger session.

Note: There are plenty of other webcam issues dealing with connectivity and some driver issues which won’t be fixed by either of these solutions.  Future blog entries will deal with some of these issues.

Recently there has been an upsurge of problems regarding Windows Live Messenger “forgetting” Windows Live IDs after a Windows restart.  Although there are some known policies in Windows which can cause this to occur, after many hours of testing and research, the latest culprit appears to be the Yahoo Toolbar.

Uninstalling the toolbar will not address the problem as its installer causes damage to your Windows user profile’s registry.  To correct all possible causes of this problem, I have created Make Messenger Remember.

Choose the Fix button for Make Messenger Remember to make the necessary fixes and restart Windows.  After Windows starts again, start Messenger if its not set to automatically do so already, and verify that your Live ID and/or password have returned.  In some cases you may have to sign in manually at least more one time.

Special thanks to MersauX, ilyaz and FYu for both testing and providing me the necessary data to create a fix to this problem.